Energy Policy and Planning Office (EPPO) prepared the Thailand Energy Situation 2015 Report. This report indicated that, Thailand primary energy consumption increased by 1.8 percent compared to the previous year. Energy consumption increased in line with the economic growth.  This year the economy grew at a 2.8 percent by the government's economic measures. The government investment, private investment, households spending and the public sector are increased, although exports continued to decrease by the slowdown of global economic.The expansion in the tourism and construction sectors grew higher. While gross domestic product in the agricultural sector decreased due to the drought in many areas. Factors mentioned above affected the energy situation of the country in the year 2558 as follow

The primary energy consumption in 2015 was at 2,595 thousand barrels of oil equivalent per day, increased by 1.8 percent from last year. Natural gas accounted for 35 percent of the most commonly used, followed by oil, gasoline, coal / lignite and hydroelectric power/electricity imports, respectively.

Production of primary energy in 2015 was 1,540 thousand barrels of oil equivalent per day. It’s lower down by 1.7 percent from the previous year. Lignite production is decreased due to the decrease of its demand in the Mae Moh power plant and. industrial sector. The electricity generation by hydroelectric power decreased as well from the reduction of water in reservoir and less precipitation in rainy season compared to previous year.

Imports of primary energy (net) is 1,253 thousand barrels of oil equivalent per day, increased by  6.9 percent from the previous year. Most of Energy import increased. In particular, electricity import increase by purchasing power from Hongsa power plant in Lao PDR., Which began supplying electricity to Thailand since February 2558. Imports of natural gas increased because the operation of Zortika natural gas plant in Myanmar. It started selling natural gas to Thailand. Since August 2014, together with LNG imports increased. 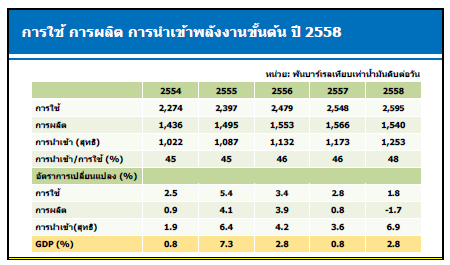 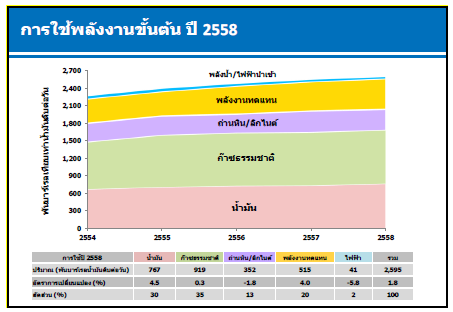 In 2015, value of energy imports was 912,931 million baht. It decreased 34.8 percent compared with the previous year. The low price of crude oil is the key factor that caused the decline in energy import value. World market prices of crude oil were fluctuating in the first half and steadily decline in the second half of the year. The world's oil supply was rising while the oil demand was not high due to the slowdown of the global economy. This year, prices of crude oil import averaged at 54.3 US dollars per barrel. The crude oil import is accounted for 65 percent of total energy imports. The energy import decrease due to the reduction of energy prices except the value of electricity and LNG import that increased by the import volume.

The energy situations for each type

In 2015, the petroleum products consumption is at 131.9 million liters per day. It rose up 4.3 percent from a year ago. It affected by the significantly decreasing of retail oil price compared to the previous year.

-  Gasoline and Gasoholconsumption is average at 26.4 million liter per day. Growing up 13.2 % compared to last year. It is affected by the increasing consumption due to the low oil price. The other affect is the turning to use LPG and NGV of Automobile users because they are cheaper with more service stations. 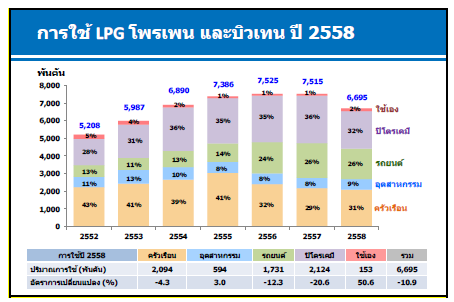 In 2015, natural gas consumption was 4,764 million cubic feet per day, it is 2.0 percent up from the previous year. The use of electricity generation is the highest accounted for 60 percent of all natural gas consumption. It rose 4.3 percent. While consumption in other economic sector decline, particularly the use of NGV is down 4.1 percent from last year by the increasing of its price. The low oil price in market made people to convert NGV engine back to consume oil. 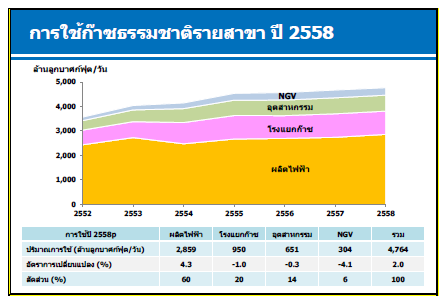 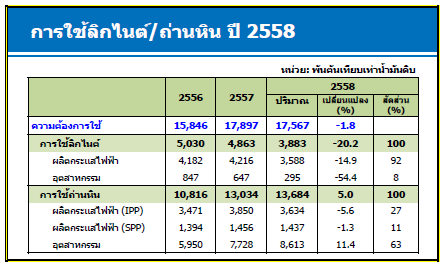 Lignite was consumed at 3,883 tons of oil equivalent, down 20.2 percent, in 2015. This is a result of the Mae Moh power plant decreased its electricity generation due to the limitations of the transmission system. The electricity generation of Hongsa Power Plant (Unit 1) 491 MW also affected by Lignite utilization. The other effect is the lower consumption in industrial sector. The imported coal consumption was 13,684 thousand tons of oil equivalent, Increased by 5.0 percent in 2015. This is the result of the increasing of coal to replace lignite consumption in the industrial sector by 11.4 percent.

System Generating Capacity, as of December 2015 was at 38,815 MW. The Electricity Generating Authority of Thailand (EGAT) is the highest production capacity in the electrical system, accounted for 40%. Followed by independent power producers (IPP) accounted for 38% small power producer (SPP) for 13 % and purchase / exchange with foreign countries 9%. Net Peak Generation Requirement is occur on Thursday, June 11, 2015 at 14:02 am. The peak is at 27,346 MW up 1.5 percent from the previous year. This is because of the long period of high temperature which is at 36.7 degrees Celsius. Electric consumption is at 174,834 units, up from 3.7 percent from the previous year due to the hot weather, especially in the first half of the year.The electricity consumption in the industrial sector are slowly increased because the decrease of exports that affected by the decrease of global economic. The Consumption of electricity has increased by almost of economic sector. Except in agriculture sector declined due to drought, this resulted in insufficient water for agriculture in some areas.Electricity production in 2015 was 192,189 million units (including the production of electricity from a very small power producer; VSPP), up 3.3 percent from the previous year. The natural gas was used to produce electricity in the highest portion of 67 percent of total electricity production. The production of electricity from renewable energy which represents a 5 percent portion, increase by 10.4 percent, according to the policy of the Ministry of Energy to diversify fuel sources for electricity production. 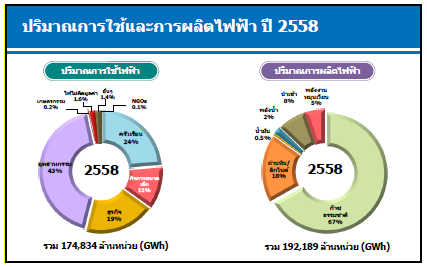 The economic forecast by NESDB indicated that Thailand's economy is expanding at 2.8 - 3.8 % in year 2016. With affected by the acceleration of the public spending and investment, the government economic acceleration measures and the slowly recover of the global economy. The world crude oil  price will remain low. EPPO expected that the average price of Dubai crude oil in the year 2016 will be in range of 35-45 USD Per barrel. The average exchange rate in 2016 is expected to be in the range of 36.0 to 37.0 baht per USD. The energy demand forecast by EPPO under the above assumption can be summarized as follows: 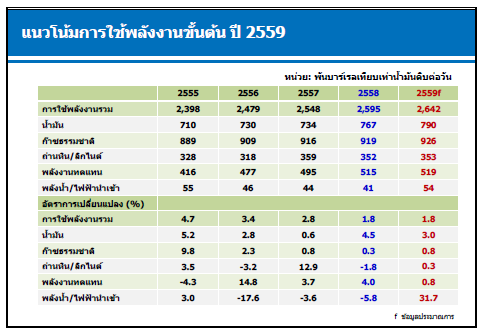 While the use of LPG (not included the petrochemicals feed stock is expected to decline 2.5 percent. 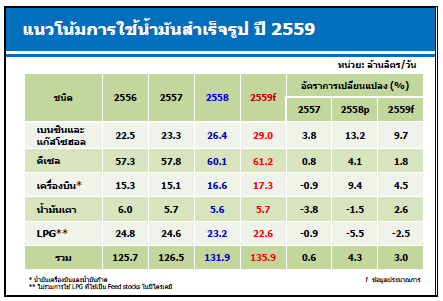 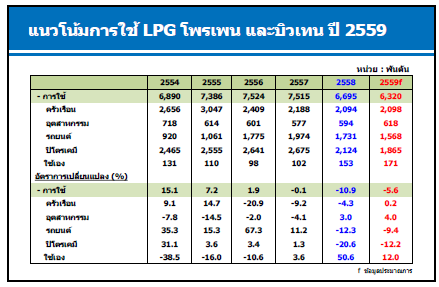 Natural Gas consumption is expected to increase by 0.8 percent in 2016. According to the Power Development Plan 2015 - 2036 (PDP 2015) that North Bangkok power plant, the natural gas power plant, will generate electricity with a capacity of 848.3 MW to system in January 2016 and renewed  Khanom power plant unit 1 with a capacity of 930 MW will start supply electricity in July 2016. Electrical demand is expected to increase 3.5 percent compared to the year 2015, which will be expanded according to the economy growth. 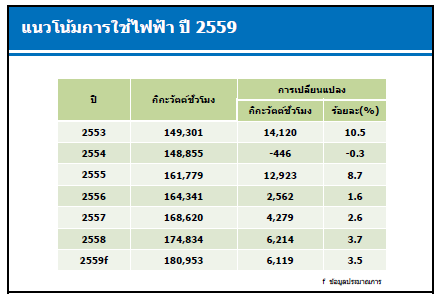 FT for the electricity retail rates (in January - April 2016 period) will drop to 1.57% compared with the FT that judged to the new tariff structure, which took effect from November 2015 onwards. The FT is set to decrease 3.23 in November - December 2015. The declining in fuel prices is the main factor that effected to the reduction in the FT in January - April 2016.