Energy Information Services Energy Situation The energy situation in the first nine months of 2015 and outlook for 2015
Thursday, 12 May 2016 15:52 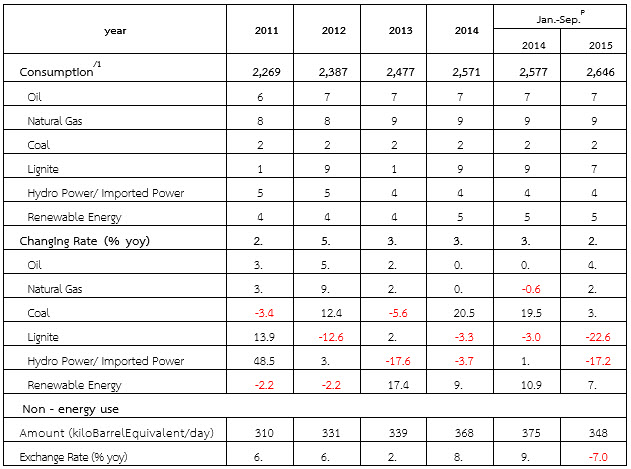 Remark /1 not include Non – Energy use

In the first nine months of the year 2015, the petroleum products consumption was at 142 million liters per day increased 1.8 percent. The demand of gasoline rose 13.4 percent due to a decrease of domestic gasoline the retail price which was affected by the decline in oil prices in the world market. The expansions of the tourism sector make diesel and jet fuel consumption increased by 3.4 and 9.6 percent respectively. Use of fuel oil dropped 5.9 percent from its use as a fuel to produce electricity. 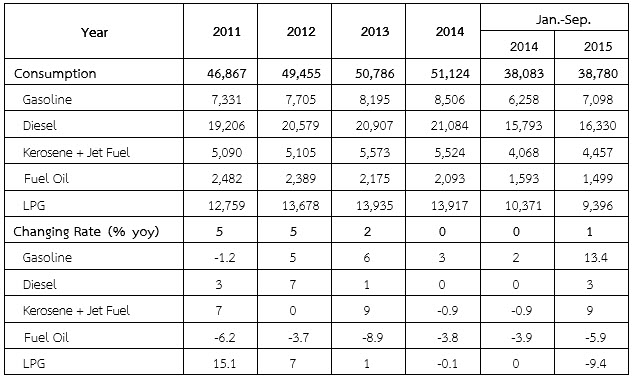 Remark LPG include the utilized as feed stock of petrochemical

In the first nine months of 2015, the fuel consumption in land transport sector stood at 16 386 kilo tons of oil equivalent (ktoe) increase over the same period of the previous year by 4.0 percent. It is caused by an increase in the use of gasoline and diesel. The diesel (Holds up to 46 percent of energy use in all sectors of land transport) has increased by 3.4 percent compared to the same period last year.While the uses of LPG and NGV in the car (13 and 9 percent, respectively) are down 10.8 and 2.6 percent, respectively, this is a major cause of the decline in prices. Gasoline and diesel steadily since mid-2014, and the price hike of LPG and NGV in 2014 for restructuring policies to reflect the true cost of government. The average retail price of LPG and NGV in the transport sector rose 2.38 and 2.50 baht per kg. The limitations of NGV service stations that still is not enough to make the use of LPG and NGV partial return to the oil.

The current retail price of LPG and NGV is at 22.29 and 13.50 baht per kilogram (Approved by the Board of Directors Energy Policy Administration on September 8, 2015), while the number of NGV service stations at the end of September 2015 totaled 500 stations, up from the previous year, only 4 stations.

The electricity consumption during the first nine months of the year 2015is approximated to be 130,800 gigawatt hours. It is increased 3.2 percent due to the hot weather in the summer and rainfall slower than last year. The electricity utilization increased in almost all sectors except agriculture.

The price of gasoline and diesel fuel (average price in Singapore market) during the month of September 2015 is at US $ 65.24 a barrel, down 0.74 US dollars per barrel compared to the average price in the previous month due to inventory is high. While diesel averaged price is at US $ 59.48 a barrel rose 2.44 US dollars per barrel due to increased demand from China, Vietnam, Myanmar and West Africa and several refineries were shut down for maintenance. 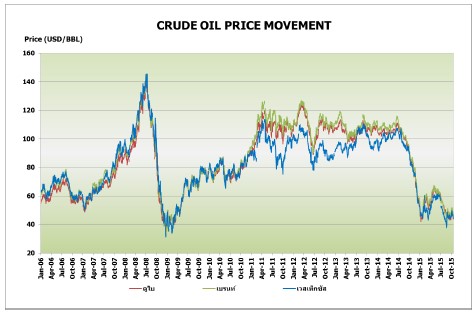 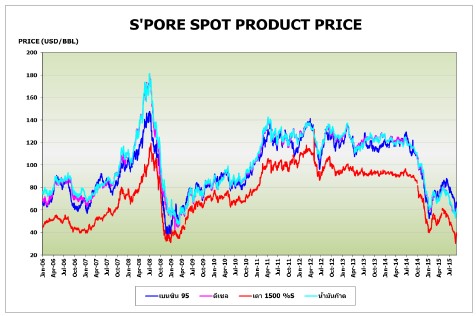 Trends in energy consumption in 2015

The primary energy consumption in 2015 is estimated at 2,640 thousand barrels of oil equivalent per day increase 2.7 percent compared with the year 2014. It expand according to the 2015 economic growth. Predicts that the use of oil for the year 2558 will increase by 3.7 percent for gasoline, diesel and jet fuel. The use of natural gas will increase by 1.9 percent and the coal consumption is expected to increase at 2.8 percent to replace the need of lignite in industrial sector. It is expected that the lignite consumption in 2015 will be down to 22.3 percent based on the decline production volumes by the private of lignite mining and manufacturer. The maintenance of Mae Moh power plant and limitations of the transmission system after the synchronize of Hongsa power plant will decrease the consumption of lignite too. While the use of hydropower and electricity imports are expected to decline 11.9 percent from hydroelectric power drop during the dry season and the less rain fall in 2015. In the year 2015, the renewable energy consumption is expected to increase by 8.6 percent compared to the previous year. 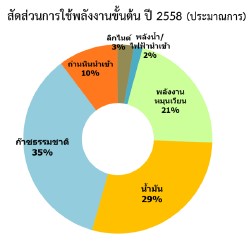 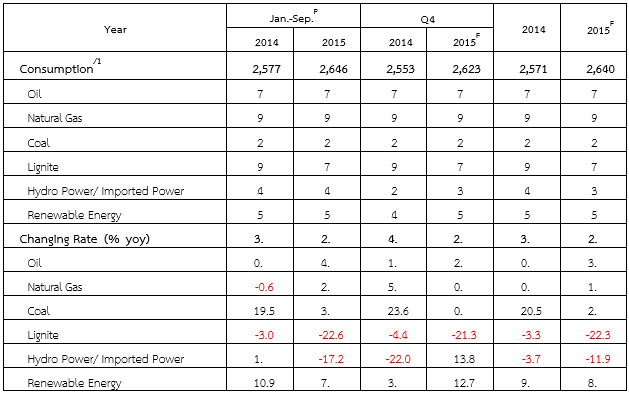 หมายเหตุ /1Not include Non – Energy use

/Festimated from data as of 4th semester of 2015