Energy Information Services Energy Situation The energy situation in the first eight months of 2015 and outlook for 2015
Thursday, 12 May 2016 16:09

The energy situation in the first eight months of 2015

Thailand’s economic forecast 2015 by the Office of Economic and Social Development Board (NESDB.) point out that Thailand's economy is expanding in the range of 2.7 to 3.2 percent due to the acceleration of government spending and investment and the implementation of public investment. The oil prices and inflation are likely to remain low, it will help increase the real purchasing power of the people. However, the slowdown of the global economy, especially China, and the Ratchaprasong Explosion on August 17, 2015 that could affect the confidence of tourists there are also risks to the growth of Thai’s economy. It is expected that the average Dubai crude oil price in 2015 is in the range of 40.0 to 45.0 US dollars per barrel.

In the first eight months of 2015, the petroleum products consumption increased 2.2 percent. The demand of gasoline rose 13.3 percent due to the decrease of domestic gasoline retail price which was affected by the decline in oil prices in the world market. The expansions of the tourism sector make diesel and jet fuel consumption increased by 3.3 and 9.1 percent respectively. Use of fuel oil dropped 6.6 percent.

The LPG consumption in the first eight months of 2015 has decreased by 7.7 percent due to lower demand in transport, Household and petrochemical sector. LPG consumption in transportation sector have decreased 9.5 percent due to the increase of LPG prices, as oil prices fell, some customers turn to petroleum oil instead of LPG. In the household sector, The LPG consumption have decreased by 4.8 percent and steadily declined since the start of stringent measures to suppress the illegal distribution of LPG. While the industrial sector has increased LPG demand by 4.7 percent.

In the first eight months of 2015, the fuel consumption in land transport sector stood at 14,656 kilo tons of oil equivalent (ktoe) increase over the same period of the previous year by 4.3 percent. It is caused by an increase in the use of gasoline and diesel. The diesel (Holds up to 46 percent of energy use in all sectors of land transport) has increased by 3.3 percent compared to the same period last year.While the uses of LPG and NGV in the car (9 and 13vpercent, respectively) are down 9.6 and 1.3 percent, respectively, this is a major cause of the decline in prices. Gasoline and diesel steadily since mid-2014, and the price hike of LPG and NGV in 2014 for restructuring policies to reflect the true cost of government. The limitations of NGV service stations that still is not enough to make the use of LPG and NGV partial return to the oil.

The Board of Energy Policy Administration on September 8, 2015 approved retail price of LPG and NGV at 22.29 and 13.50 baht per kilogram, respectively

Remark /Pestimated from data as of August 2015

FT during May - August 2015 stood at 49.61 satang per unit, will be down 3.23 satang per unit in the September - December 2015 due to the drop of fuel prices in the world market, and the depreciate of exchange rate in the past.

The electricity consumption during the first eight months in 2015is approximated 116,350 gigawatt hours. It is increased 3.4 percent due to the hot weather in the summer and rainfall slower than last year. The electricity utilization increased in almost all sectors except agriculture. 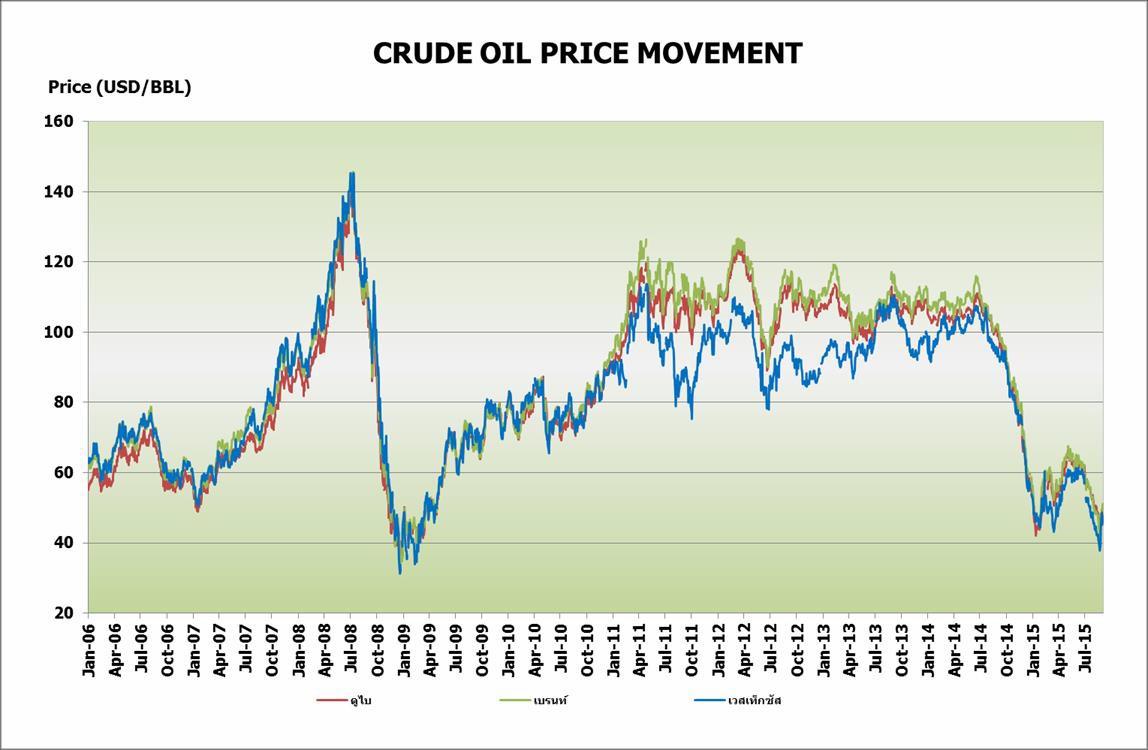 Remark /P estimated from data as of August 2015